Miss you so much our beloved little Toni

Int Swe Dk Fin Nor Nordic Ch Junior World Winner 2003 Norvegian Winner 2004
Tendency Of Celtic Odyssey
She came to us from France at 1 year and had no problems to be one in our dog gang.
Before she became a mother she had a great showcareer, not only the great titel of winning Junior World Winner in Dortmund,
sha had also many groupplacings as an adult and as a youngster she had several Best in Show.
She was a great mother of 12 puppies in 2 litters and many of them are
Champions and also Worldwinners and European winners.
Her best friend was Wilma who passed away just 5 month earlier and she never gave up looking for her.
Toni really missed Wilma and get old at once.
Now they are together again!

The great Wilma has finished her days on earth

It was incredibly hard to make the decision to let Wilma walk over the bridge
and meet her relatives and friends. But the time had come for this great dog.
Her showcareer was fantastic.
2 times World Winner, 1 European Winner, 2 Nordic winner and 3 times Swedish Winner
Her titels was
Int Swe Nor Fin Dk Nordic Vdh Kft Ch Bla Skuggans www blaskuggan com
(her name has its own story, she is the only dog with a internet name in Sweden)
She was the winner of 35 CAC, 39 Cacib, 43 BOB, 2 BIS-R, 4 BOG-1, 4 BOG-2, 1 BOG-3, 5 BOG-4 and 5 BOG-R.
She has been showing around Europe and also at Crufts dog show where she got VHC.
She is mother to both Swedish and English Champions.
Last show for Wilma was at the age of 12 at My Dog 2012 where she finished BEST IN SHOW-4 Veteran
and also in veteranclass at the worldshow in Saltzburg.

Ingrid was not only a great show dog she also really loved water so
when the chanse come she allways took a swim.

Top winning Bedlington in Europe has passed away.
Simba you will allways have a special place in our hearts - you were THE BEST !

There is so much about Simba so we have created his own page
Please take a minute and have a look !

Press on the picture

and a gentleman has come to heaven !

Bill was born 1993 and died 2007.
He did nearly the impossible by winning the WORLD WINNER TITEL 3 times!
In Helsinki it was 70 bedlingtons! The other 2 World shows was in Austria and Milano. During his showcarrier he took following titels.

Ch Bla Skuggans Keep An Eye On Me "Bill"

has come to heaven !

13th of august our lovley Jackie had to finish her days on earth.
Thanks to Trudy and Sieger for letting us have her many years ago. She has not only been a wonderful compaignon for us and the rest of the dogs, she has also been a wonderful showstar and a excellent mother to her 3 litters of total 16 puppies, 11 of them has beacame Champions and also 2 WORLD WINNERS, and EUROPEAN WINNERS.

The heaven has got a new star

!
It is with heavy heart we had to say goodbye to the most wonderful, graceful and kindness bedlington in the world.
We will never forget you Grace and we will miss you very very much.
She was the daughter to one of the most winning Bedlingtons in Sweden of all time Ch Bla Skuggans Dancing In The Dark but also the mother to the most
succesful and winning Bedlington in whole Europe of all time Ch Bla Skuggans Never Fear . 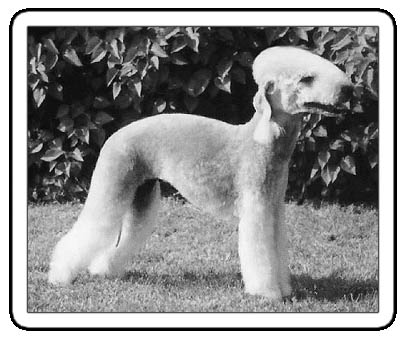